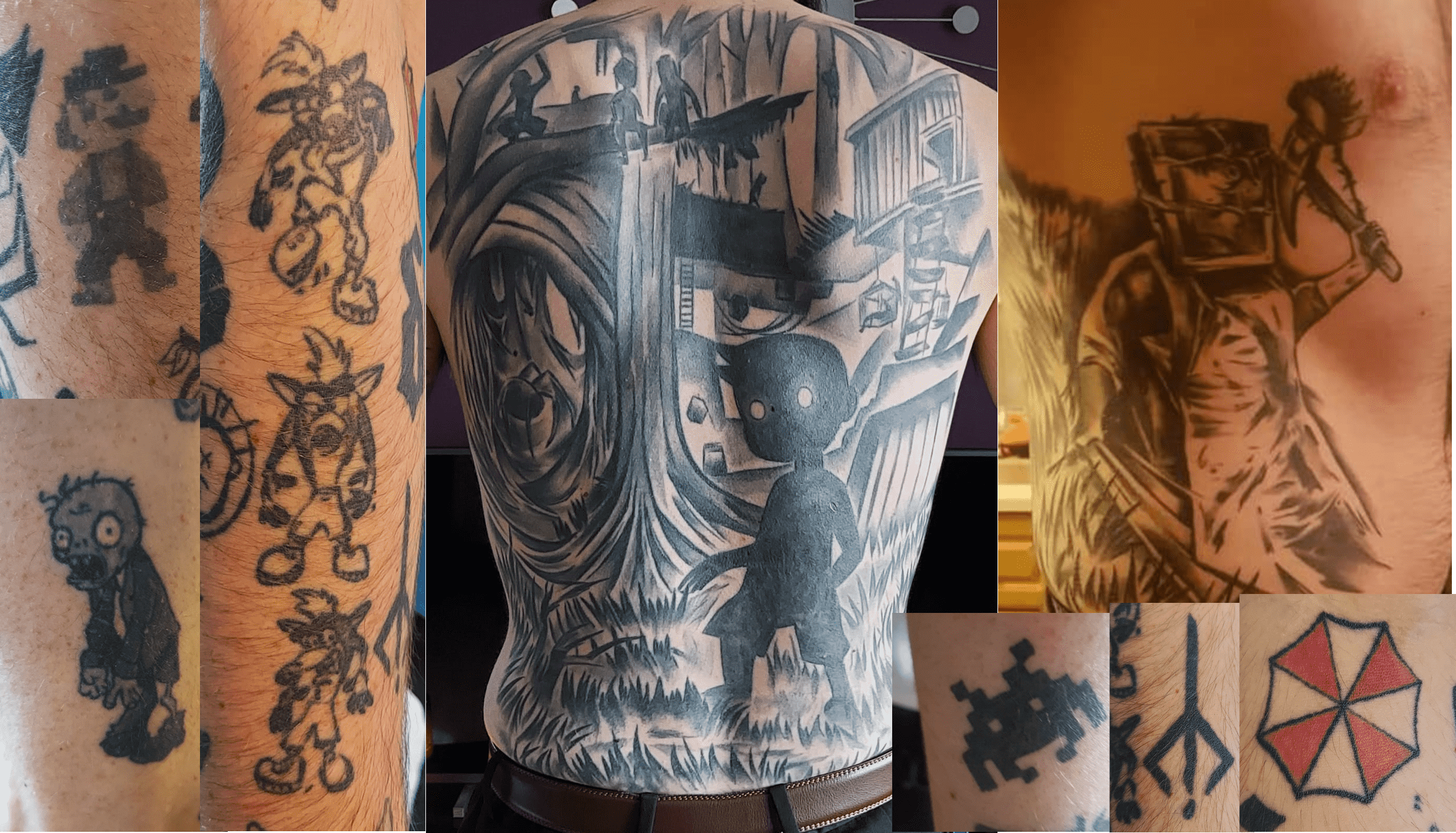 Something about tattoos intrigued me from when I was a young teenager. Perhaps it was due to my love for drawing that made the whole ‘pieces of art on your body’ idea so appealing. Maybe it was the steady increase in people with tattoos at the time. Long gone were the days of them being only for sailors, criminals and the mistake many grandfathers made before they met the love of their lives (shout out to all the Audrey’s who had their names covered up over the years by a swallow bird or black/grey roses). The reason behind my interest in the art bewilders me to this day. Only a handful of people I knew had tattoos, so being influenced by others was not the reason. And I am certain no one took me for the kid who would go on to have as many tattoos as I do now, but I’ll get to that later. Whatever it was, my fascination with tattoos continued to grow throughout my teenage years. The summer of 2014 came, my not great but not awful A-level results arrived, and my family and I were on holiday when I pitched the idea of having a tattoo to my parents. With their monocle’s in, clamped down by their judgemental frowns, they said, ‘Jordan, you will destroy your future prospects in any worthwhile career if you even dare to desecrate your skin with such obscene body modifications’. Of course, they didn’t utter those words and instead, were wise and supportive. And so, by the end of the year, I had my first tattoo.

Understandably most go with something small for their first bit of ink. I cannot claim to be as cautious. Over several months I had my entire left arm covered, making up a sleeve consisting of artwork from The Walking Dead comics. Just before Christmas 2014, we finished and my arm now has twenty-four different illustrations from the comics, creating a collage effect. Was having a sleeve tattoo from the get-go risky and perhaps naïve? Truthfully, yes it was, and I would not argue it wasn’t. But being young and impulsive, I made my decision. I am lucky that the artist did such a superb job and gave me a tattoo that I do not regret having at all. Two things blossomed here, one being the itch for more ink on my body and the other being the friendship between the artist and me. Now he is an incredibly good friend who knows all about my infatuation with video games, even helping me create the logo you see at the top of the screen (thanks again mate). Between 2014 and today, I have amassed over sixty tattoos ranging from the size of a 50p coin to my entire back. Not surprising to anyone, many are related to videos games in one way or another.

I will spare you the details for each tattoo as it would become more self-indulgent than I’m comfortable with. Alternatively, I’ll sum it all up by saying I have subjected myself to around seventy hours of tattoo needles penetrating my skin, from anywhere between fifty and three thousand times per minute. Here would be perfect to insert the gif of Ricky Gervais saying ‘ooh, you’re hard’. But that all culminated in me ‘getting inked’ with designs I am proud to have displayed on my body. Nearly a quarter of the tattoos I have relate to video games in some way, with two of them not being completely finished hence their omission in the heading picture. My right arm is comprised of random designs that will make for a full sleeve with time.

Firstly there is the iconic Space Invader Crab in the centre of my outer forearm. Space Invaders, Pac-man, dig dug and Galaga are classic games that have been played by millions of people the world over. I wanted one of the four as a tattoo, and with me only having black and grey tattoos (with a little red here and there), the instantly recognisable invader was chosen. Further up from that is a black/grey Mario, resembling his original 8-bit design. This particular style stuck out to me as another perfectly fitting piece for a retro gaming tattoo. Seeing it for the first time, moments after the machine stopped, made me smile from ear to ear. It is rare when what we envision in our heads and the outcome, in reality, match up, but this was one of the moments. Going round my arm to my inner forearm, I have the Hunters symbol from Bloodborne. Another straightforward design but eye-catching to those who know the mark. Surprisingly enough, this tattoo has resulted in several compliments over the years and proven to not be as niche as I once thought. Just beside it are three of my most treasured tattoos, and those are three designs for Crash Bandicoot found within the originals concept art. Taking a franchise partly known for its vibrant art style and yet wanting a black and grey tattoo design seemed counterintuitive at first. But soon after, I bought ‘The Crash Bandicoot Files: How Willy the Wombat Sparked Marsupial Mania’ which proved to be an invaluable source of inspiration. Here I must mention that my mum paid for me to have these done as my 22nd birthday present (BEST PRESENT EVER).

Towards the top of my forearm, near the tender and often dreaded crease before the bicep, is the Resident Evil Umbrella logo. There was no doubt I wanted an RE design somewhere, and so here it is. Next to that is the Tomb Raider pickaxe badge, and then up my arm is the classic zombie from Plants vs Zombies. Other designs fill the paces in between, with more still to come. A few other tattoos on my arm that are not video game related are logos for two of my favourite rock bands (Shinedown & Black Stone Cherry), a minimalist design of the character Dwight Schrute from The Office US, a drawing from the film Drop Dead Fred and a quote that reads ‘Our thoughts do not define us, but have the potential to consume us’ (because I’m edgy, deep and often stare into the distance in a pensive manner, mirroring the latest aftershave advertisement). The last two tattoo’s related to games are the Keeper on my ribs and artwork from the indie game Limbo, covering my whole back.

The Keeper, being one of the main antagonists in The Evil Within, I have always adored the design of and the symbolism behind its appearance. In case you were wondering, yes, the ribs were very unpleasant to endure being tattooed on. And lastly, my back and the most prominent tattoo I have by a country mile. Limbo is and has always been my pick for the best indie game. I will most certainly be talking about Limbo again on this site, for many reasons that I will eventually get to. Every tattoo I have written about here I am immensely pleased with and happy to carry. Several of them have deeper meanings, while others I wanted simply because they looked awesome!

Tattoos have proven to be a wonderful part of my life so far. They have made for some great conversation starters and helped break the ice on more than one occasion. In my day job (preschool teacher), they have repeatedly captured the children’s intrigue and seemingly encouraged them to initiate their own conversations with me about 'what’s on my arm'. They have resulted in me forming many friendships over the years and even, in part, helped me with my confidence in talking to others and dealing with ‘uncomfortable’ situations. Naturally, they have brought a few downsides, like being immediately judged (a few people have admitted to making judgements based on how I look, and then changed them after talking to me). Some workplaces will still see them as unprofessional and not suitable, to which I say that is their prerogative that I hope changes in time. But the pros have genuinely far outweighed the cons. Asking me if I’ll have more tattoos is the equivalent to asking if I’ll be playing the latest games, and the answer is, without a doubt. To anyone looking to get their first bit of ink, I have five pieces of advice:

1 – You get what you pay for, and so do not be disparaged by a higher price. You carry it for life, and so it is like an investment.

2 – Wait six months and if you still want it then get it. Don’t be impulsive like me, I was very lucky.

3 – Keep it in a place that can be covered for now. The world is changing, but some workplaces will still hold tattoo’s against you.

4 – Get a tattoo YOU want. Do not let anyone influence you to change it because they think it will look better. The only exception to the rule is your tattoo artists opinion, work with them.

5 – You may love Audrey when you're 18 and have two cinema tickets, but are you sure you will feel the same way when you are 30 and have a mortgage? Basically don’t get names, for the love of god do not get names!