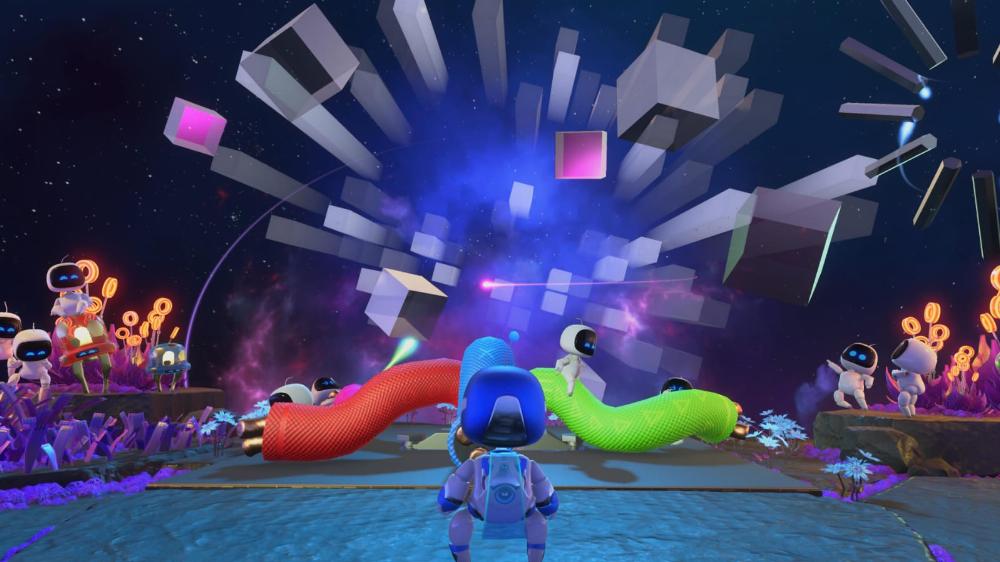 Astro’s Playroom released as a pre-installed title with every PlayStation 5, with the PS5 launching back in November of last year. Every enthusiastic gamer will be greeted with this little gem during the quick setup process. Astro’s Playroom was developed by Team Asobi, one of the teams that make up Japan Studio. At its core, Astro’s Playroom is a showcase for the Dualsense controller/console hardware capabilities. But it would be an unforgivable disservice to the developers to summarise the game as just that because what they have created is one of the most enjoyable platformers I have played in years!

It begins with the camera going inside a PS5 and dropping you into CPU plaza. This acts as the Hub area that is designed to replicate the inside of the console itself. Four levels open themselves up to you immediately, and each one is a component from the specs found within each PS5 system. One level acts as the SSD (Solid State Drive) while another resembles the cooling system, and so on. Essentially, the game acts as if it’s all taking part inside the PS5 you play it on. It is up to the player to decide which stage they choose first, with there being no assigned order. I chose SSD Speedway as my starting point. I was warped to the level without seeing a loading screen, seamlessly transferring from one area to the next. I knew the console was going to boast such impressive loading times or lack thereof, but it still amazed me when I witnessed it for the first time myself. Ironically, the level I chose is named after the component responsible for my delight. From here, the game sets you on a linear path that has been filled with collectables, various mechanics, gorgeous scenery and an abundance of references… oh, the references!

The rest of the game tasks Astro with making his way through several distinct areas containing many nods to a particular console generation. Suppose you were going to tackle each level in chronological order of each generation then, in that case, Memory Meadow is the place to start, with the level containing numerous artifacts (type of collectable) from the original PlayStation. If you’re anything like me, then this will bring a smile to your face time and time again as each memory resurfaces. I can only recall two occasions where I briefly struggled to find them, as most are not exactly hidden but rather tease the player in how they are just in the distance or up within the CD-esque branches of the trees. None of them will demand too much from the player to claim them, other than some good-old platforming. Other collectables come in the form of puzzle pieces that create a mural of each consoles time period. Hundreds of coins near-drench each stage also, acting as currency for the the Gacha machine that reward the player with yet more collectables. You can view every collectable in the PlayStation Labo area at any time, basking in all of Sony’s gaming history.

And as if that wasn’t enough self-indulgence on Sony’s part, the game also pays homage to around sixty games that span two decades worth of gaming. Dotted around each stage, bots will be dressed up as familiar figures from PlayStations past. Every five minutes or so, I would grin from ear to ear or replicate the Leonardo DiCaprio/Once upon a time in Hollywood meme as I observed another adorable recreation of my favourite games. This could be Crash Bandicoot performing his dance on a cliff-edge, J. Valentine and C. Redfield taking cover behind a door or even Pyramid Head dragging a poor bot by its leg. Tributes are paid left, right and centre with it essentially being fan service in the best possible way. 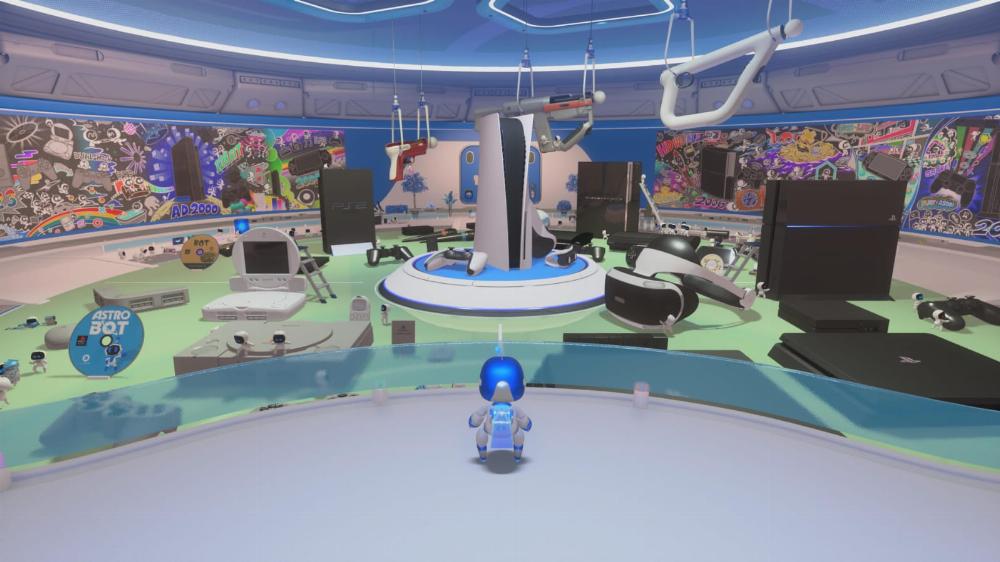 I cannot help but smile

Immediately the game strikes you with just how uplifting and positive it all feels. The colours are vibrant, and every part of each environment is like a wonderland fresh out of a child’s imagination. It’s not a graphical powerhouse but is no slouch in that department either. It all looks like a modern animated film for the whole family, which is just as much for the parents as it is for the children. No area appears dull or lacking in charm. Even in a section that intentionally has a darker tone, still firmly holds on to the same whimsical atmosphere. Animation plays a key role here, with each robot, enemy and NPC having their own short but sweet role to play. You may stumble upon a group of bots playing ridge racer, while another may be admiring the buster sword embedded into the ground. Others may be dangling from balloons as others take a swim in the water just below. Collectively, the visuals exude nothing but joy and would surely make any gamer crack a smile multiple times. And in case that wasn’t enough to elicit a giddy feeling inside, then the music will almost definitely tip you over the edge. The soundtrack is phenomenal and coincides with every other aspect so well. The soundtrack was released digitally only a couple of weeks ago, and I have thoroughly enjoyed listening to it going to and from my workplace. It’s just as bouncy as Astro’s footsteps, just as joyful as the level designs and just as loving as the game itself. CPU Plaza (Mashup Overture) is a track I still expect to be listening to in many years to come. 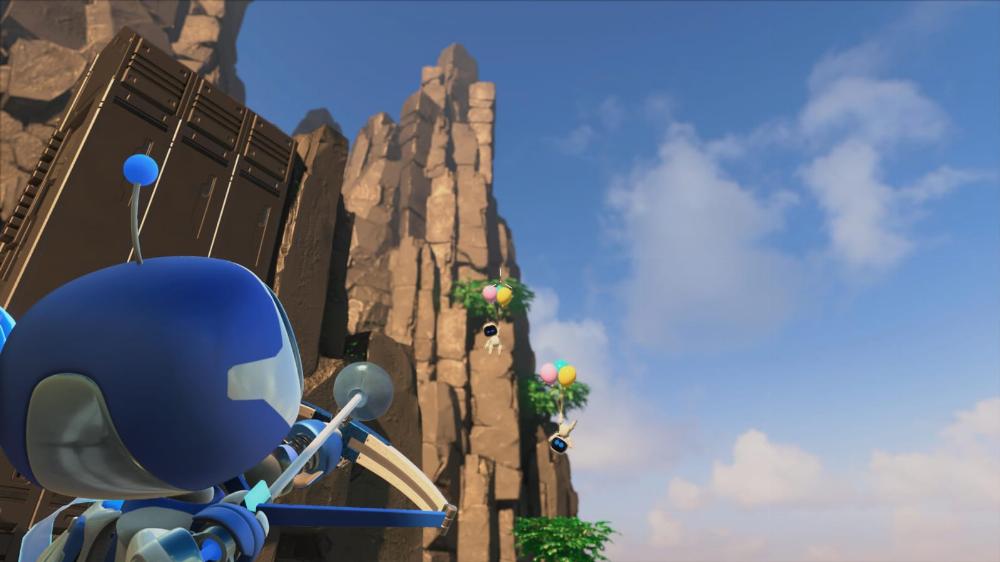 Sit back and enjoy

Difficulty should be no cause for concern as this is a generously easy game that forgives you for any mistake with checkpoints littered throughout. The likelihood of you releasing how frequent the checkpoints are is low as you’ll most likely only fail a handful of times. Fellow robots act as the enemies in the game, with there being a decent variety. The method of dispatching them works in tandem with how you control Astro himself. Segueing into the controls, Astro’s move set is comprised of the abilities we have all come to expect from the average platformer, that being jumping, hover for a few seconds, punch (or hold down square to unleash a series of punches as he spins) etc. For the basic manoeuvring, the controls are incredibly simplistic. Nothing new is added to the formula, but as the saying goes ‘if it isn’t broke…’. On occasion, the game will equip Astro with a ranged weapon that utilises the triggers, albeit quite infrequently. However, each stage has its own suit for the little bot to hop into. And this is where it shakes things up a little. One stage will require you to use the controller’s touchpad to guide a ball around obstacles, whereas another will need the player to use motion controls to propel themselves upwards. The monkey and rocket suits being my highlights. And here is where the game flaunts exactly what the Dualsense controller can do. 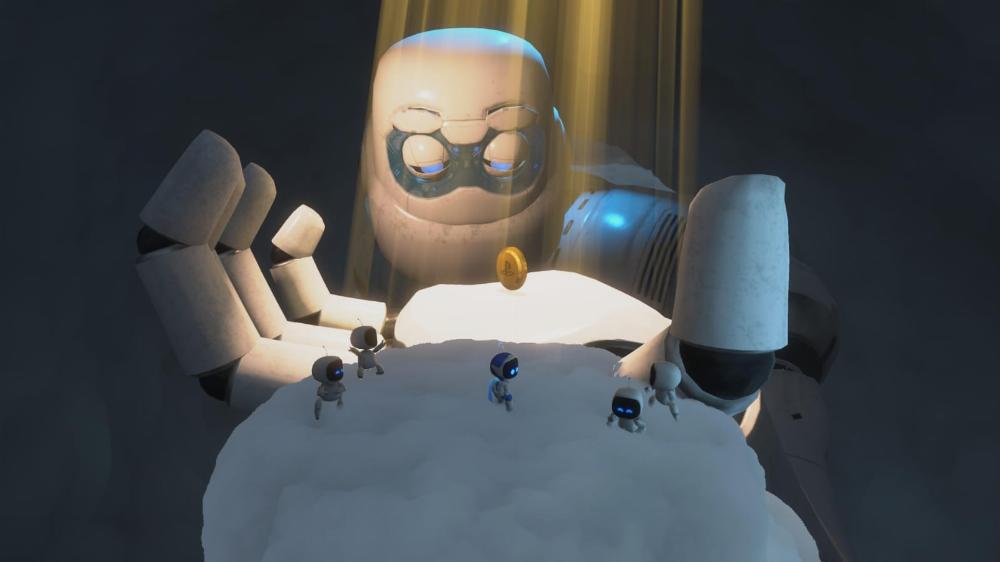 Raindrops are falling on my… controller?

Undoubtedly one of the most impressive and exciting features is the inclusion of the haptic feedback and adaptive triggers the controller has built into it. Haptic Feedback is no revolution, with it first entering the fray back in the ’90s. But evolution has most certainly taken place, and so the Haptic Feedback elevates its use to a new standard here. Rather than an overall rumble that feels the same each time, the controller can be much more precise. Many sections in the game demonstrate this, but I found it most immersive when rain fell on Astro’s pop-up umbrella. Not to sound cliché, but it genuinely felt like the rain was tapping against the controller throughout. The vibrations were subtle and varied enough to almost simulate the feeling of rain hitting a surface. Each time you boot up the game, it will require you to flick your finger along the touchpad as if to throw Astro from it. With the controller speakers turned up, feedback set at medium or higher and a dose of imagination… it works well in immersing you in this feeling of ‘you’re in the game with Astro’ or at least an overlooking presence.

As for the adaptive triggers, the innovation here has many promising implications for the future of gaming. The right and left triggers now bolster varying resistance, requiring the player to alter how much pressure they need to put on them. For instance, during the chapters in which you are in the monkey suit, you will need to squeeze the triggers to hold onto ledges as you scale the level. Some ledges will require more precision, meaning you need to press down slightly, or the ledge will crumble. The triggers resist at the point where you should stop applying more pressure. Another example is when using the triggers during the rocket suit parts. Both will resist as you push them down and will also vibrate constantly as if you can feel the boosters in your hands. I would recommend setting the triggers to medium in the system settings as I think this is a perfect middle ground. It remains to be seen whether the features are yet another gimmick that falls from grace soon after the initial buzz. I would rather these controller features than motion control any day, so here’s hoping it’s the way forward. 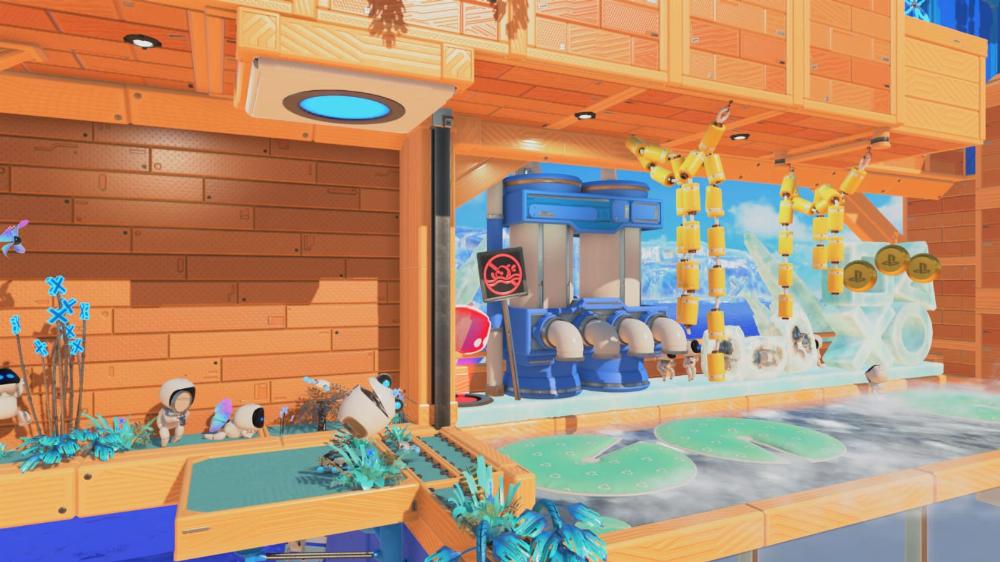 At only around three hours long, Astro’s playroom is a short experience but an unforgettable one at that. The overall playtime is precisely the right length for what it sets out to be, and again, players technically get it for free (after the steep asking price for the console itself). As a preinstalled title that offers a magical insight into the future of the PlayStation 5, it outdoes itself with charm and evident love for gaming’s past, and should be the first title you delve into when finally being able to obtain the console. I was almost sad to see the credits roll but more hyped than ever to jump into the next chapter of gaming!