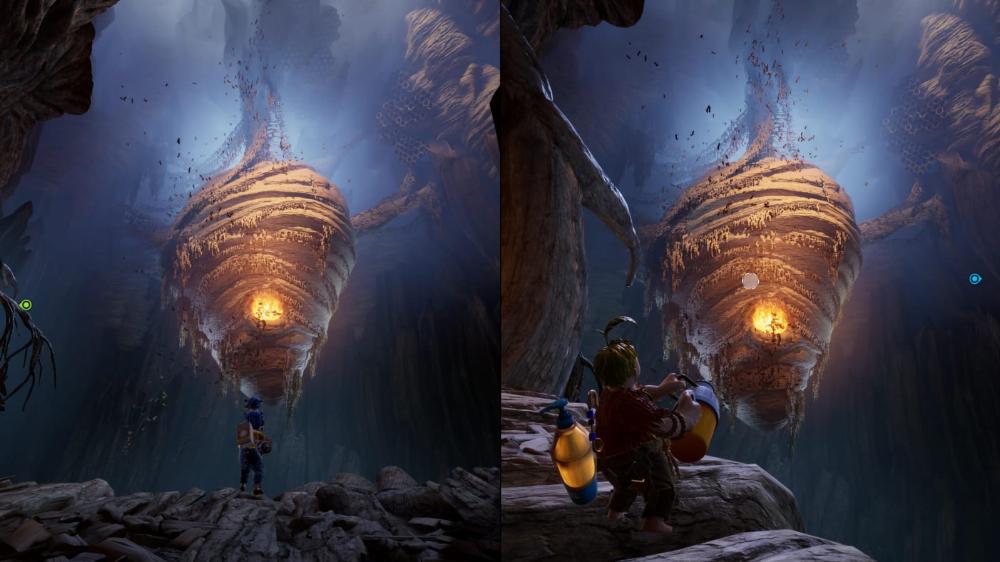 It Takes Two is brought to us by Hazelight Studios and continues with the concept of being a title that must be completed with two players, hence the title. Much like their debut game (A Way Out), two players will share the same screen and so are able to see what the other player is doing throughout their playtime. The roughly ten-hour adventure will be spent entirely in what we all know as ‘split screen’, and this will be the case in both local and online sessions. Admittedly it is slightly strange at first, but within around ten minutes you become accustomed to it and, by the end, it would almost seem wrong if it wasn’t played in that way. I have been eagerly awaiting the game's release, especially since A Way Out made for such a unique and endearing experience that rejuvenated co-op games in a way that seemed all but forgotten. It Takes Two goes on to refine many aspects from Hazelight’s first game, with a few issues plaguing its story. 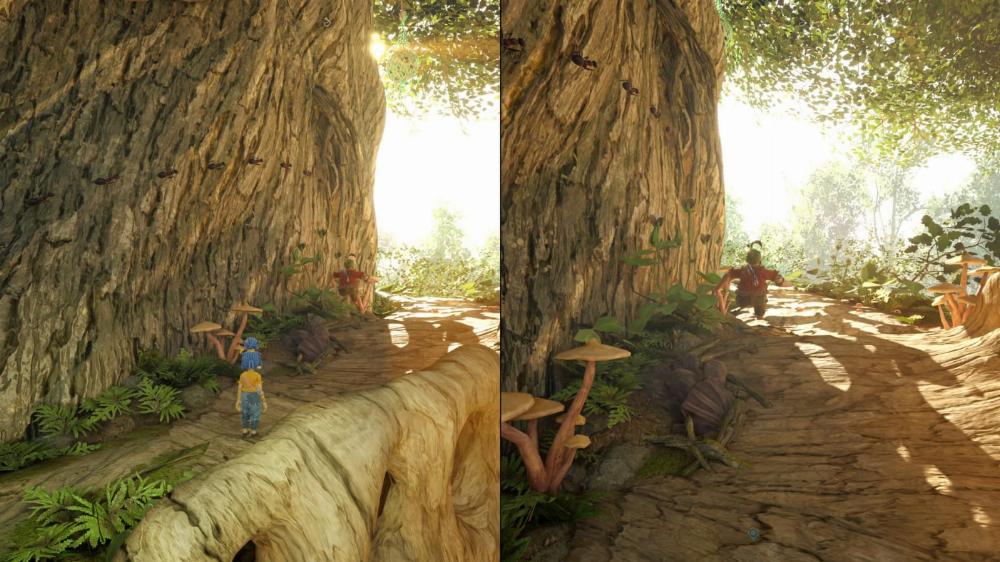 Through the eyes of a toy

It Takes Two doesn’t waste much time in setting up the narrative. Quickly it is shown to the players that a mother and father are on the brink of divorce, and a daughter is caught in the middle. Fortunately, the story doesn’t take itself too seriously, and so within minutes the parents are magically ensnared in two of the child’s toys. From here, the two are tasked with; surviving hazards that were once less than a foot tall but now tower over them, finding a solution to their whole trapped-in-a-child’s-toy predicament (think Chucky/Child’s Play but without the voodoo) and finally, saving their marriage. What follows is a bizarre but somewhat wholesome story that, overall, lands on its feet, albeit quite unsteady. It hits the usual beats you would expect. At first, they constantly squabble and bicker like immature teenagers but manage to still have moments that show the players there is a spark left between them. At times it appears they make progress and begin to connect as a loving couple once again, to then suddenly begin bickering for what felt like the umpteenth time. On the other hand, the game does have a couple of heartfelt moments and a generous amount of levity to keep the plot going in a way that avoids being overdramatic or too questionable in how these two people ever fell in love.

This is also the same story in which squirrels are akin to a group of soldiers, frogs are not-at-all-stereotyped Italian taxi drivers, and an anthropomorphic book counsels the couple through their ‘relationshit’ (yes, you read that right). The voice acting is pretty decent throughout, although know going in that the voices are essentially caricatures at their core. I chuckled many times at the sheer sound of these cute characters bolstering such ridiculous voices.  What was most puzzling was not the countless array of cartoonish and whacky characters peppered throughout; if anything those characters proved to be some of my favourite parts of the game. What puzzled me was who the game was meant to be for. At first, it seemed abundantly clear it was children with just enough adult themes to cater for that age as well. But sprinkled unevenly throughout were some very adult themes, jokes and locations that felt like a mature parody of typical children’s film. A few examples being when you grind a rail through what I believe was a dead and bloody whale. Or the moment the couple try to make their daughter cry by killing her most treasured teddy elephant, as they theorise the daughter’s tears will release them from their new toy bodies. And when I say kill, I mean to drag the elephant by its legs as it begs them not to. A friend began screen sharing at this moment, and the three of us could not contain our laughter as we watched the sudden tonal shift take place. The target age bracket remains a mystery here. Expect the story to bounce around like a cluttered pinball machine entitled ‘The Texas Rainbow massacre’. I won’t spoil too much here. The story is certainly unconventional, uneven and perhaps a little underwhelming. But the real pleasure here is the gameplay. 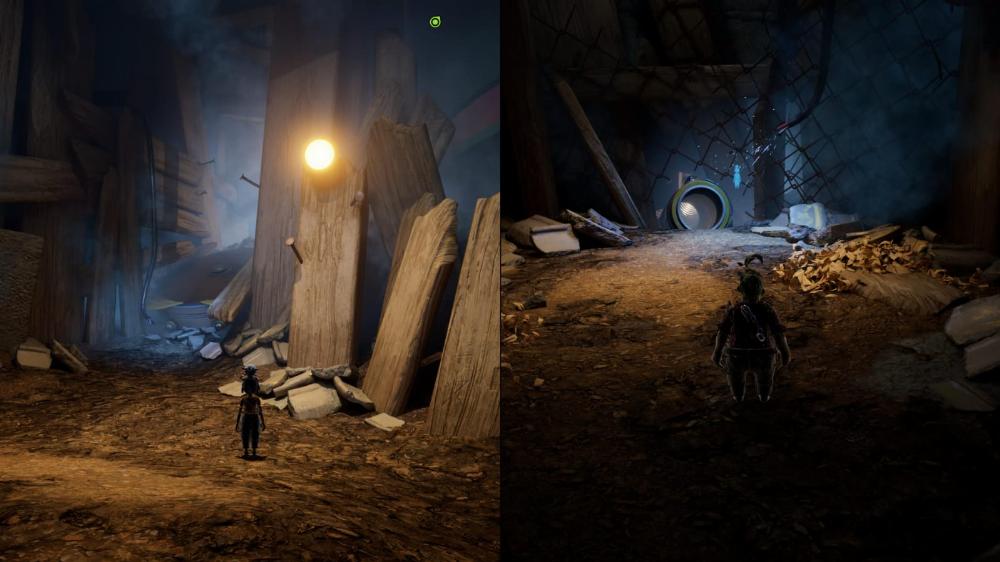 Silky-smooth from start to finish

As my co-op partner can attest, I quickly gushed over the control and animation in this game. A Way Out felt rigid and sluggish at times with how you controlled the two lead characters. Hazelight hit it out off the park with It Takes Two, making the control of these toys a joy to move around. The square button allows you to dash and a second well-timed press will grant you another seamlessly animated burst in movement. Platforming is relatively simple, with just enough to keep you switching your approach to obstacles (R1 to rope swing or grind, usual jump and double jumps, aforementioned dash ability that must be used as an air dash also). If platformers are a genre you particularly enjoy, then It Takes Two should be on your to-play list.

It must be said that the playtime is made up of a lot more than just hopping around. Like the story, the game has plenty of curveballs to throw at you throughout. Unlike the story, the flurry of new ways to play consistently feel fun to engage in. For instance, the game will place you in a toy boat in which one person steers while the other fires cannonballs at attacking pirates and a relentless plushie octopus. Another section may ask one player to fire magnets onto an icy cliff face as the other player jumps to each one before it slips off. Or the game goes full ‘dungeon crawler’ and gives you both magical powers to dispatch Playmobil-like knights. Almost every new idea makes for some brilliant and clever ways to play. My picks for the top three gameplay sections are; bending time to allow an explosion to create a path for us to cross, travelling through space and becoming even smaller and the boss battle between us and a toolbox! Here I feel I should mention the boss battles littered throughout the game. 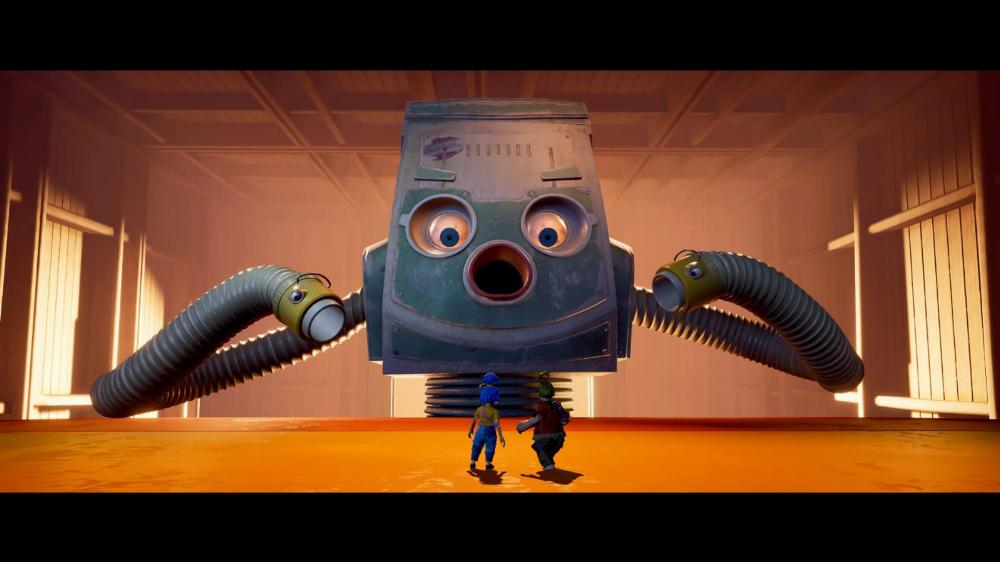 Not too long into the game you encounter a hoover/vacuum cleaner who isn’t best pleased by your presence. To my surprise, a health bar appeared at the top of the screen, and the boss battle ensued. Just like the platforming, the strategy for defeating the creepy-looking device was basic (dodge attacks, wait for an opening and worked together to deal the blow). But I’m compelled to say I thoroughly enjoyed the fight and continued to enjoy each battle after that. Every gargantuan foe follows roughly the same formula of avoid, pair-up, attack, but that isn’t to say they are particularly monotonous. Somehow, they continue to feel fresh and inventive and require teamwork to take them down. Of course, the entire game encourages solid communication and chemistry between you and your teammate. The majority of the game is fairly easy, but on occasion the difficulty will suddenly spike, and teamwork is imperative to your success. This being yet another issue with who the target audience is as some sections are surely much too difficult for children to complete, but I digress. On the flip side, there are moments that ditch the notion of working together and instead put both players in competition with one another.

Blend your efforts… or just literally blend your partner!

An amusing diversion comes in the form of minigames that are the only type of collectable in It Takes Two. Twenty-five of them can be found over the duration of the game. These range from Tug of War, in which you both mash the triangle button, to Plunger Dunger that has you both shoot targets back at each other. And, Chess can be found later on as well! I adore Chess and so dashed my way over to the area. Few of them go to the effort of a full-blown game of Chess with a nearby instruction book, fully rendered with text and images to see in-game. However, they help keep the experience from becoming stale. There are also countless small details in each area for you to observe or interact with. Do you want to throw paper planes from the top of the garden tree? Or maybe you would like to paint a picture with the now oversized easel? Perhaps you fancy feeding toy pigs and them guiding them into a slaughterhouse? Well, you can do all that (even the third option), and these are all interactions that are not necessary to complete. These small details bring a smile to my face every time, and It Takes Two has plenty of them. 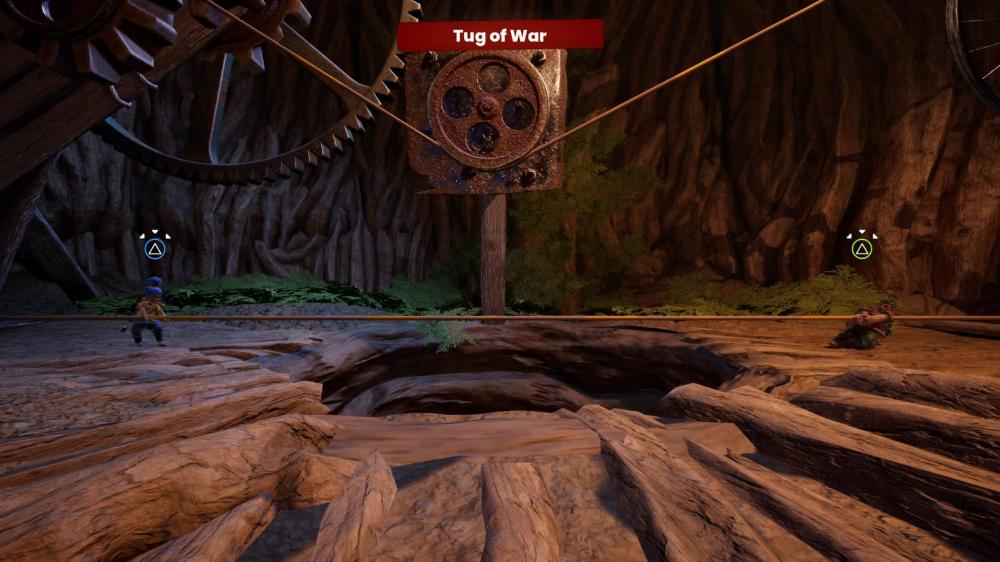 If Lionsgate and Pixar had a baby

Visually, It Takes Two is stunning in each of its locations. The lighting paired with the art style ooze a mixture of delight, playfulness and just enough threat to make the enemies and their habitats feel menacing in a way that is very reminiscent of the film Coraline, just with more vibrancy. Locations such as the hive and the garden are like paintings come to life, and my jaw dropped when first seeing the hive in the distance. Some locales are a touch more menacing, and the initial chapter stood out as darker and more threatening in tone. Character designs vary to an extent as well, as they can go from unquestionably cute and fluffy to more of a theme that could be called ‘a child’s first horror film’. Cute and fluffy is the dominant theme here though, so no nightmares should be had. The music is less striking in that it is very subtle for most of the game, even the section all about music. They seem to gently accompany each stage, softly playing in the background as you communicate with your teammate, and perhaps that was the intention. I did rather enjoy the jingles playing over the snow globe and when you’re setting the stage. I must mention that we had six audio cuts throughout, with each one lasting a second or two. 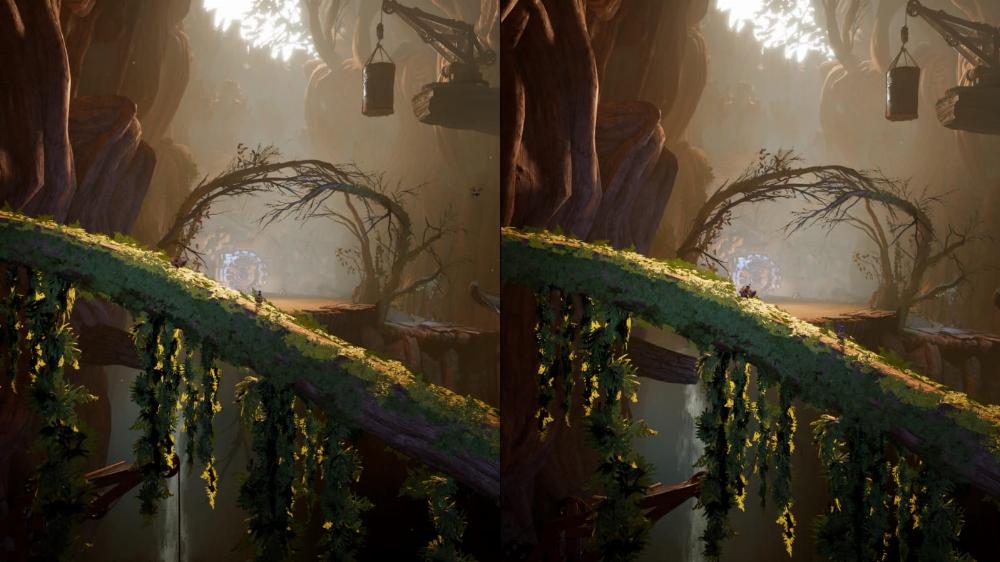 It Takes Two took everything from A Way Out and tweaked it to either improve it or practically perfect it in some instances. The story has moments in which it is sentimental or heartfelt, but mostly it acts as a way to get you from one set piece to another. But those set pieces are incredibly entertaining, and the gameplay has been improved to consistently provide riveting moments for both players. We did have a blip near the end where the servers were down, meaning we literally could not finish the story for a brief period. If possible, then couch co-op is the best way to tackle the game. Despite the odd hiccup here and there, It Takes Two is one of the best cooperative games to be released as of late. Hazelight Studio has truly cemented themselves as, perhaps, the Kings of the couch co-op space and I cannot wait to see what they create next!